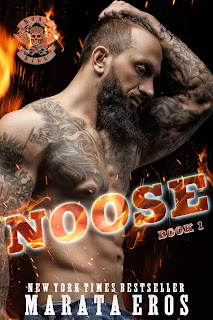 Noose - BOOK ONE IN THE ROAD KILL MC SERIES
☞ All Retailers
A smorgasbord of sweet butts, one for every taste. Noose has a sweet tooth that won't quit, and a clubwhore to suit his every need.Road Kill Motorcycle Club isn't a tough choice for Noose. A former Navy SEAL expert knotter, he's killing road now. Women and freedom are the benefits of being a one-percenter ... until Rose Christo comes along and slams the brakes on his outlaw existence.
Rose knows death. Murder stole her sister, and gave her a son who's not hers. Love doesn't come in neat packages; it comes in the form of a five-year-old boy.
Never count on a man.
Never love.
Never.
When her sister's murderer demands his property, who does Rose trust? She has one job: protecting Charlie. A hot motorcycle thug isn't enough to sway her from the course.
Diablo is determined to take Charlie. Noose is just as determined to protect Rose from the club's #1 rival. Can he - when Rose denies his protection?
She soon turns Noose's life upside down. Rose means way-more than she should. When a certain Chaos Rider kidnaps her as a means of coercion, Noose finds he's willing to tie a knot especially for Diablo. Noose won't have anyone threaten his property.
Even if Rose isn't aware she belongs only to him.
Diablo has plans for Rose Christo that reach far beyond getting his property back. He wants another woman to abuse. After two encounters with Drake, she knows she will not survive a third.
Has Rose misplaced her trust in Noose?
As Noose's careful facade begins to slip, he must admit what Rose means to him: More than property. More than novelty tail. More than anyone has ever meant to him before.
The woman he loves.
Is Noose ready to sacrifice everything to tie a knot so permanent, no one will recover? Road Kill, him - Rose?
Can Rose withstand what he'll need to do to keep her safe?