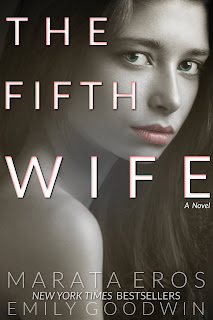 THE FIFTH WIFE, A Novel
Co-authored with Emily Goodwin
☞  All Retailers
Limitless deception and manipulation that poison the mind within the perfect "marriage" in this dark thriller of taboo passion and secrets by New York Times bestselling authors, Marata Eros and Emily Goodwin.
Audrey's family was happy before The Community, their lack of wealth didn't stop their love for one another--until Father Weston convinced her parents to become part of his flock. He says her family they're special, deserving.
They're not.
Barely more than a teenager, Audrey joins the ranks of Chosen and becomes one of the other wives in the grand house on the hill. Father Weston guarantees she's the most special of all the wives.
She's not.
When Audrey begins to covet a forbidden man, who is not her husband, she must silence her yearning or risk a punishment so permanent, she'll never recover.
Kiev attempts to resist Audrey as she inserts herself as an obstacle in the carefully laid path of vengeance against a father whose deceit has ruined his life.
As a deception too horrible to believe is revealed, can Kiev remain true to his design of revenge, or will his love for Audrey sacrifice them both?
Authors' Note: ***If you do not wish to read about hard topics, or you're under the age of 18, or if you want a feel-good, sexy read, this is NOT the book for you. The Fifth Wife is part dark romance, part suspense thriller, and is a gritty, harrowing tale about finding love in the darkest of places. Read at your own risk. Might contain triggers.***
This [revised] novel was originally published in 2015 under the title: "One of Many.