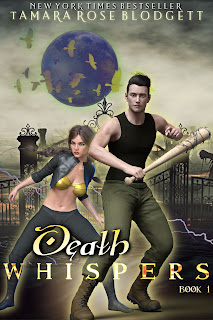 Death Whispers, BOOK ONE of the DEATH SERIES
☞  All Retailers
★★★#1 Amazon Dark Fantasy Bestseller★★★
Almost fifteen-year-old Caleb Hart is a Cadaver-Manipulator in the year 2025.
When teens receive a government-sanctioned pharmaceutical cocktail during school, paranormal abilities begin manifesting... making the teens more powerful than the adults.
After Caleb discovers he has the rare, Affinity for the Dead, he must do whatever it takes to hide it from a covert government agency whose goal is exploitation.
Caleb seeks refuge in his new girlfriend, Jade, until he realizes that she needs as much protection from her family, as he does from the government.
Suddenly, Caleb finds that hiding his ability while protecting Jade and his friends is a full time job; can he escape the government, protect Jade and lose the enemies who are making him miserable?