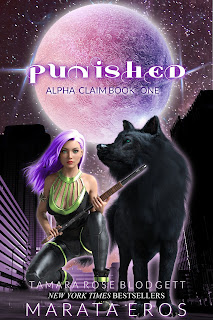 Punished, BOOK ONE of the ALPHA CLAIM SERIES
☞  All Retailers
Narah Adrienne is a bounty enforcer in the near future. She runs the seedy side of her game, capturing criminals too dangerous for the local law enforcement. Using unorthodox methods, she finds herself in the crosshairs of the Magistrate for too many allowable kills for the quarter.
And her head hurts like hell.
Aeslin is part of an elite vampire squad of Turners. A rare sect of vampire scouts who possess the ability to find women with enough undead blood to be turned into full vampire.
Bounty enforcer, Narah Adrienne, has been served her sentence in the form of three lashes to be meted by a corrupt Magistrate. She's unable to acquire her target as instructed, while strange health issues force Narah to seek help in the dangerous medical underground. They might have answers—for a price.
Narah Adrienne is a scant twenty hours from her sentence of three lashes. But first she must meet Marc, her liaison with the illegal underground. He might have the fix for her mysterious medical condition.
But Marc's solutions come with questions attached—and at a cost too high to pay. Now that Narah understands her bounty target is really a Hunter assigned to commit a part of her to death, she must make the best choice among terrible options.
Worse of all, if Narah does not make her hearing the sentence will worsen. Either way, she could die.
Only one man can save her and technically, he's not human.
Narah awakens in captivity. She's escaped the final lash from a sadistic Magistrate meant to teach her temperance, only to find that her sentence was not meant to be a lesson, but an execution.
Matthews discovers the truth of Hunter leadership, and with an uncertain end goal he determines to follow his heart, though that decision might cost him his life.
Aeslin has exposed his race by removing Narah in plain sight. With the blood clock ticking down the minutes of Narah's life; she turns or she will die.
What will happen when both Matthews and Aeslin discover the real motive behind the lashes?
Being turned isn't everything it's cracked up to be. Narah's a vampire, yet not. Because of a twist of fate and circumstance, Narah finds she's tied to both Aeslin and Matthews.
She's now wanted as a deserter from sentencing by the very people she fought beside. And Magistrate Oren still wants his final lash—at any cost.
From opposing forces, Murphy and Marc find a common goal in helping Narah return to her former life. However, Aeslin and Matthews have other plans, ones that involve her soul—and her heart.
When everyone is taken from Narah, and a sadist holds the reins to her sanity, can the males fulfill their promise to protect her, or will Narah be left to fight this battle alone?
Narah's been sold out by the most unlikely source, and faces a far graver punishment than her original sentence by Magistrate Oren.
Marc and Murphy have now been caught in the crosshairs of her new life and face dire consequences as a result. Opposing forces and their hidden agendas continue to move Narah like a chess piece toward an inevitable stale mate.
Can Narah return to her old life? Will she be hunted for an escape that was beyond her control—or will her tie to Aeslin and Matthews help her regain all that's she's lost—and more than she ever dreamed possible?