When Choosing BLOOD is Never Easy....

As promised, an excerpt from my next release: BLOOD CHOSEN
Coming Labor Day 2013! 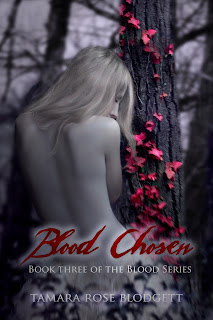 Julia's angry and confused, because the tables have been turned. What she thought she knew is no more, what little bit of continuity Julia gained, has been stripped.

“I haven't forgotten who I am,” Jason said, his hand going to his chest, thumb pressing deeply into the muscles of his bare chest, tattered denim barely clinging to provide a semblance of modesty.

“She has,” he said, pointing a finger at Julia and she lost it.

It was the last accusation of how awful, incompetent, ungracious and uncaring she'd put up with. His rant hit low and deep, tearing something apart inside her that she didn't know she had.

Julia strode to Jason, five feet four to his six feet one and open-palmed slapped him without breaking stride, the ringing of her flesh on his filled the silence with the sharp echo of her anger. It made her palm burn and her wrist ache. “Don't you tell me how wrong I am, how much I suck and how you don't give a shit about me. I get it. And,” Julia's eyes struck his like a patch of searing sunlight, “... FYI, I didn't ask for this.” Her lip trembled with the need to cry and she held it in, biting the inside of her lip to do it.

Jason's eyes blazed and he reclaimed the stride she'd given up, looming above her, the imprint of her palm an angry smear of red on his face.

Julia was simply too pissed to be scared, her anger at everything over the past two years coming to an ugly head. Jason put a tender hand on her head, smoothing over her hair from the crown to the soft roundness before it dipped to her spine. “I hate you, Jules,” he whispered as he pulled her close to him and she nodded, tears rolling despite the blood that filled her mouth to stop it.

“I know,” she replied softly.

Then he drew her into his arms and kissed her, his breath sucking in as that drop of blood inside her mouth burst between them like a gem of inception. Jason wrapped Julia against him, his lips moving away from her mouth and pressing soft kisses all over her face as she gasped and cried, clinging to him and kissing him back, her hands moving up to link together around his neck and he buried his face into her neck, half picking her up.

“I love you,” Jason said against her neck before he allowed himself to be torn away by Scott.

Julia watched that slice of vulnerability like a fleeting cloud race across his face. “I know,” Julia whispered for only his ears to hear....

I know guys, but this is the tone of CHOSEN. Julia grows, weaknesses become strengths. Untenable choices will be made. Subterfuge will reign supreme and some hateful characters will cause strife while ones we love do their best. Such is life if Singers were a reality....
Email Post