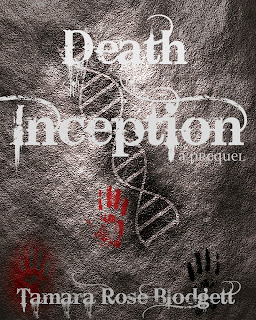 Kyle Ulysses Hart and his team of scientists mapped the human genome in the year 2010. As Brain Impulse Technology came online... so did the long arm of the United States government. A covert, military-driven regime was born with genetic manipulation the key to future widespread control.
When pharmaceutical laboratories, funded by the Graysheets, discover a way to unlock paranormal potential through compulsive inoculation, their exploitative dream is realized.
A lone teenager named Jeffrey Parker, falls prey when he manifests the rare, Affinity for the Dead.The Graysheets abandon all pretense of stewardship, ripping him from his family for their nefarious purposes.
Can Jeffrey remain who he was destined to be in an environment exclusively built for mass control?
*
Readers have spoken! I will begin work on a prequel to the Death Series. Never fear! It will not delay the promised release dates of any of my full-length novels! The plan for INCEPTION will be a novella-length book (that is about 20,000 words or 60-ish pages). My "regular" novels have been between 85-110K. In an effort for my work to remain affordable for my readers I will be offering DEATH INCEPTION for .99 cents.
Thank you, Readers! Your input and interactions are very appreciated. Tamara
Email Post