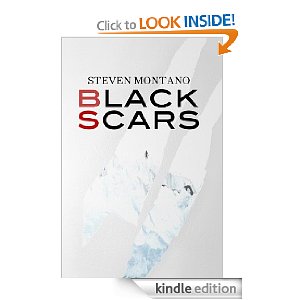 Black Scars (Blood Skies Series, Book 2)
.99 cents through Halloween~!
*treat yourself*
Something ancient has awoken. Primordial and wholly evil, a living shadow emerges from a prison made weak by the magical cataclysm called The Black. Now the Sleeper stalks the land in search of its old enemies, leaving a trail of madness and destruction in its wake.
Eric Cross, a Southern Claw warlock, has been sent to find the Woman in the Ice, the only known means to stopping this evil. Aided by a grizzled ranger and a band of wardens and inmates from a sadistic prison, Cross’ mission will bring him into conflict with an array of foes: the barbaric Gorgoloth, vampire shock troops out of the Ebon Cities, and a cadre of mercenary nihilists called the Black Circle. On a mission that will take him from a lost temple once ruled by insidious wolf sorcerers to the vicious gladiator games of the vampire city-state of Krul to the deadly ruins of an ice city, Cross will play a pivotal role in an ancient conflict whose outcome will determine the future of the world. Return to the world of Blood Skies in this exciting military fantasy adventure!

Review by Tamara
I just finished book two in the Blood Skies Series and feel like I ate my supper...twice! Don't kid yourselves, guys, this is a main entree, no appetizer or dessert served here! Montano really understands how to deliver dark fantasy and make no mistake, it's dark.

In this adventure, Southern Claw Solider, Eric Cross, takes on more than he can handle and becomes a prisoner and gladiator-of-sorts for vampires. Wanting nothing more than to survive, save his comrades and find the Woman in the Ice/Lake he does just that...with the single-minded focus only Cross possesses. I am not a big high fantasy fan but what saves the genre for me is Montano's descriptive prowess. It may not be for all, but a less adept writer could never have managed the weighty material. Look at the following example:

~The undead exploded. Pale animated bodies and jagged skeletal weapons, razor vapors and icy claws, maggot hearts and grave dust, soiled black fire and cursed souls: all of it immolated within the onslaught of primal spirit matter like paper put to the flame~

The entire work is a scene-scape of words. In some parts I desperately wished to escape the vividness of his writing, especially in battles, my heart raced! But there is no escape. You are IN the battle, while the melee swirls around the reader. This is a heavily descriptive work with great pacing and action throughout. Fans of high, dark fantasy are going to love this second installment in the Blood Skies Series.
5 Stars!
Genre: Dark Fantasy
Sub-genre(s): Paranormal, Militaristic
Elements: Strong Violence, some Profanity
Age: 16+